In this bi-weekly podcast, your hosts Tracey and Scott take you to Disney, Indiana and discuss books, movies, music, theme parks, video games and whatever else in the Disneyverse they’d like to talk about.

They’ll share audio clips, interviews and other surprise along the way. If you enjoy all aspects of the Mouse, come hang out in Disney, Indiana. 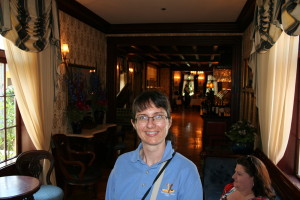 Hi, I’m Tracey, one of the co-host of the Disney, Indiana podcast. Age-wise, I’m closer to the Fairy Godmother end than a princess, but I’ll always be a kid at heart. I try to enjoy a bit of Disney every day, whether it’s through something I watch or listen to, something I’m wearing or just chatting about the topic with Scott or online pals. I’ve also visited both US Disney themeparks multiple times and consider our Adventures by Disney:Backstage Magic tour a trip of a lifetime. 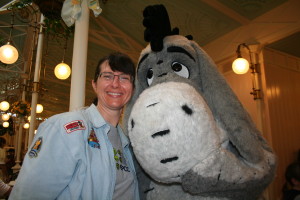 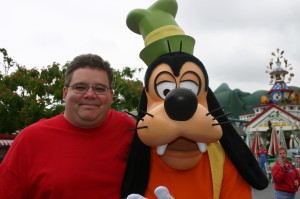 Note: Scott is the one on the left

Hello, my name is Scott and I am the other co-host of the Disney, Indiana Podcast.  I’m a 30something guy who never really wanted to grow up.  I still enjoy all things Disney including movies, theme parks and meeting with the characters.  I’ve visited both Walt Disney World and Disneyland several times and even taken one Adventures by Disney Trip.

Disney goals I have 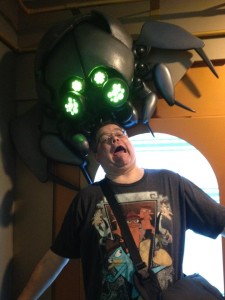 If I could make just one change to an existing Disney Park, it would be bye-bye hat at Disney’s Hollywood Studios.

Outside of Disney, I enjoy golf and bowling, driving my 1966 Chevy Corvair and zombie movies. Tracey and Scott together 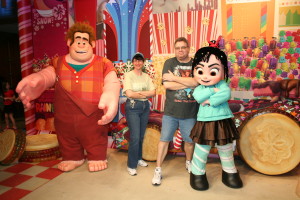 Our first trip together to Walt Disney World in 1996 during Walt Disney World’s 25th anniversary.   We have been to WDW together 12 times and Disneyland together 4 times.  We’ve also taken the Adventures By Disney: Backstage Magic tour, seen Beauty and the Beast, Lion King and Disney’s On the Record stage shows and a couple of Disney on Ice performances. If you would like to read about some of our past Disney trips, please check out our trip report archive!

He may have been your father, boy, but he wasn’t your daddy.Yondu , Guardians of the Galaxy Vol. 2