Shuttle Carrier Aircraft 905
Shuttle Carrier Aircraft 905 one of two extensively modified Boeing 747 airliners that NASA used to transport Space Shuttle orbiters. One is a 747-100 model, while the other is a short range 747-100SR. The SCAs were used to ferry Space Shuttles from landing sites back to the Shuttle Landing Facility at the Kennedy Space Center. The orbiters were placed on top of the SCAs by Mate-Demate Devices, large gantry-like structures that hoisted the orbiters off the ground for post-flight servicing then mated them with the SCAs for ferry flights. In approach and landing test flights conducted in 1977, the test shuttle Enterprise was released from an SCA during flight and glided to a landing under its own control. After the shuttle program ended, the SCA 905 was disassembled into 7 large pieces for the eight-mile journey from Ellington Airport to the Johnson Space Center. The Boeing Aircraft on the Group team of mechanics and engineers removed the tail, aft section, landing gear and wings, marking the first time Boeing separated both wings from a 747 outside of a hangar. Travel at night, special hydraulic trailers were used to move the 920 foot convoy of pieces to Space Center Houston. Once in place, the high-fidelity shuttle replica "Independence" was mated to the aircraft. 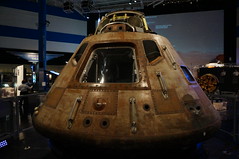 Apollo 11 Command Module, Columbia
Columbia was the only part of the Apollo 11 spacecraft to return intact to Earth. It carried the crew, equipment and precious lunar samples through a fiery re-entry into the Earth's atmosphere. Following Columbia's triumphant 50-state tour in 1970, during which it was seen by more than 3 million Americans, NASA transferred it to the Smithsonian for preservation and display.

The flower that blooms in adversity is the rarest and most beautiful of all.The Emperor of China , Mulan