In today’s episode Tracey and Scott wrap up their monthly Perspective on Pixar segment with a look at Pixar’s Shorts. They each pick their top five favorite shorts, talking about each of them and explaining why they picked them.

Then they make their way over to Flynn’s Arcade to talk about Epic Mickey for the Nintendo Wii and Tracey takes the lead on this one and her experience painting with Mickey and Oswald.

Finally, our hosts talk about their recent trip to Chicago to take in the exhibit Jim Henson’s Fantastic World at the Museum of Science and Industry.

After a near disaster in the Disney, Indiana main control center, our hosts share their thoughts on Disney’s 50th animated film, Tangled.  Going beyond the film, they share the problems, both inside Disney, Indiana and out, in trying to see this film.

Tracey and Scott continue the Perspective on Pixar series with a look at 2010’s Toy Story 3, sharing their feelings on the film and the recently released blu ray release of this film.

Between these two films, they listen in on WWED where Buzzy plays some songs for both films as well as a ride thru of Toy Story Mania! at Disney’s Hollywood Studios in Florida.

They wrap up this episode with some listener feedback. 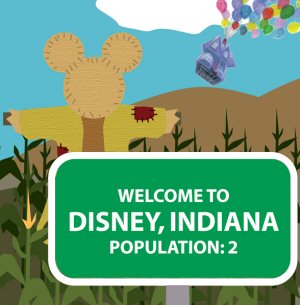 Tracey and Scott take their listeners along on a virtual tour of Phase I of Disney, Indiana LandWorld, their version of the Magic Kingdom theme park. They also share their thoughts on the Mary Poppins: The Musical production and discuss Up in this month’s Perspective on Pixar segment. The WWED music segment returns, and our hosts wrap up the show with a listener review of Mickey’s Not So Scary Halloween Party and other feedback.

Tracey and Scott are stuck in an airport on their way back to Disney, Indiana – but that doesn’t stop them from putting on the show.

In today’s episode, your hosts discuss their recent trip to the Pacific Northwest, including PAX where they got to play Epic Mickey and the San Francisco bay area where they got to see the Walt Disney Family Museum and the Pixar: 25 Years of Animation exhibt at the Oakland Museum of California.

They also sit down with Jay and Heather of 1976 Tron Court in Disney, Indiana to help them prepare for their first trip to Walt Disney World.  This is the first of a two-part interview.

If that wasn’t enough, Tracey and Scott look at the 2008 film Wall*E in this months Perspective on Pixar segment.

We wrap up the show with some very cool feedback!

After breaking the biggest news in Disney history, our hosts continue their Perspective on Pixar segment with a look at 2007’s Ratatouille.  They are joined during this segment by Disney, Indiana resident ZombieHunter Tony – besides being a zombie hunter, Tony is also a chef and fan of this film and he’ll bring his kitchen skills to the table to discuss if Pixar did a faithful job creating a restaurant’s kitchen.

The special guests don’t stop there, Kaity and Athena (and their father Mortis) from the Mortis Matinee podcast join our host for talk about the dog days of summer, Disney style.  Everyone then gets to talk about their favorite Disney dogs.

Our hosts wrap up the show with a little feedback and a discussion of their next adventure.