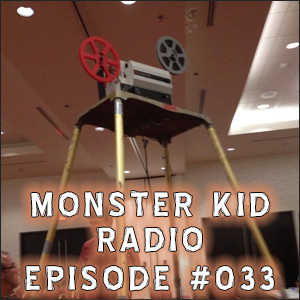 The host of the Disney, Indiana podcast once again venture outside the house of mouse to appear on the Monster Kid Radio podcast. They attended HorrorHound Weekend Con the weekend of September 7-8, 2013. While at this con, they took in the Ray Harryhausen Super-8 Tribute Show (along with a bonus Super-8 show) hosted by We are Movie Geek’s Tom Stockman.

Although the 8MM film format was originally intended for home movie use, major film studios released condensed versions of their films in this format all up until the mid 1980s. Most titles were shorten to either 8 or 17 minutes, depending on the film length used. Collector Tom Stockman showcased the work of legendary animator Ray Harryhausen in this format and Tracey and Scott were fortunate enough to attend.

What did they think of this show – and the bonus show the following night that covered such diverse films at It Conquered the World (1956), Jaws (1975), Reptilicus (1961) and many others. Check out Monster Kid Radio episode 33 to find out.