In today’s episode, our hosts, Scott and Tracey invite another guest to the Ink and Paint Club. Author Charles E. Zitta joins Tracey for a chat about his fantasy-adventure book series: Disney and the Wonder Within. They talk about his love of Disney and his creative process and influences and delve a bit into the books themselves. Then, our hosts travel back in time to December 2012 to share a set from Mulch, Sweat and Shears, a band that used to perform at Disney’s Hollywood Studios. Along the way, they call over to the Main Street Cinema before wrapping up the show. 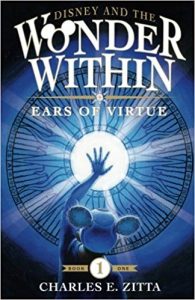 Disney and the Wonder Within: Ears of Virtue (Volume 1) by Charles E Zitta